Three critically acclaimed French authors have revealed that they gain inspiration from Oman’s landscape and heritage.

Antonin Potoski, Guillaume Thouroude and Nicolas Presl, all declared their love for the Sultanate during an exclusive interview with the Times of Oman.

Thouroude, author of several non-fiction books showcasing his adventures around the world, said, “I came to Oman thanks to the University of Nizwa where I was offered the position of Assistant Professor in French. I came in August 2015 and found myself very happy in Oman, and more particularly, with the beautiful Birkat Al Mowz, where the campus is located. My wife and I are happy in this old oasis where birds chirp in the palm trees. We truly feel as if we’re living in a paradisiac spot.”

On writing, he said, “The best travel experiences for me involve people and landscapes. Nice people without an interesting territory don’t stimulate me. On the other hand, a striking landscape without encountering anyone from that place makes the experience void.”

“I will always remember swimming in the Purple Clouds Lake in Nanjing with my Chinese friends. Similarly, I wrote a travel book about Ireland and I think the most vivid scenes concern the strange cityscape of Belfast, where nomadic Irish travellers live. I am attracted to human aspects first. I was attracted by the Irish people before seeing the country,” he added.

The trio came to Oman as part of French School Muscat’s Francophone Day celebrations. Their stay was organised by the school with support provided by the Ambassador of France to Oman, Renaud Salins.

Potoski shared Thouroude’s enthusiasm for the Sultanate. “I come to Oman because of its perfect position between East Africa and South Asia,” he said. “My books are real stories, happening in Myanmar, Bangladesh, Ethiopia, Japan, Indonesia, Mali; in between those countries, there is always a very peaceful few days stop in the Sultanate.”

This year, his books alongside those of Thouroude and Presl, were studied by three classes of students at the French School in Muscat. “Our lecture on March 27 was the final event for students who were already familiar with our works, and I have to say their questions were brilliant.”

He added, “Oman is interesting to me because it brings together many of the societies I explore and describe in my travelling stories: Oman has historical ties with East Africa. It also has modern ties with the Indian Subcontinent, with the presence of thousands of expatriates.”

“Also, I would say Oman is the most interesting of the Gulf countries, because of the diversity of the Omani society. When you listen to conversations in public spaces, you can hear Arabic, Swahili, and Balushi. Those multiple origins make Oman very special for a travel writer like me,” he further added.

Potoski has won numerous awards in Europe and even helps publish the works of young photographers as a curator.

“Indeed, while I was writing my first books in Mali and Morocco, I worked as a photography curator and published the first series of several young photographers. Some of them were simple villagers who enjoyed witnessing their daily lives, another was a football player.”

On his work, he says, “More than an artist, I am a writer. I write only non-fiction books. That means that before writing, all those stories need to be lived! Thus, a big part of my work is meeting people who end up becoming like family.

“I travel to complicated areas such as the border between Ethiopia and Eritrea or the border between Myanmar and Bangladesh. This is possible only because, in both places, I have more than 10 years of close relations with the locals. I talk about friendship, about magical moments in those lost places.

“I don’t have a house and have not stopped travelling since 1996. I can say that the ‘moment’ becomes my house and that friendship makes me feel at home, wherever it happens.”

Like Thouroude, Presl is also a resident of Oman. He initially came three years ago to teach French. “Oman is a country in flux, it’s fascinating to observe. It’s a place very different from France, where change happens quickly. But the Omanis, they remain the same, welcoming and accessible. I like the quiet life here,” Presl said.

The graphic novelist, whose works cover a diverse range of themes and subjects, draws strongly on history. “I have always had a taste for history and I have this practice of reading historians’ texts in parallel with literary ones. It is important to know a little bit of history to better understand our era,” he added.

Presl concluded with a message for young writers and artists. “Our societies need imagination, new ideas, images, and poetry. Young artists must persevere in their desire to share because we will need them to confront and understand the times to come.” 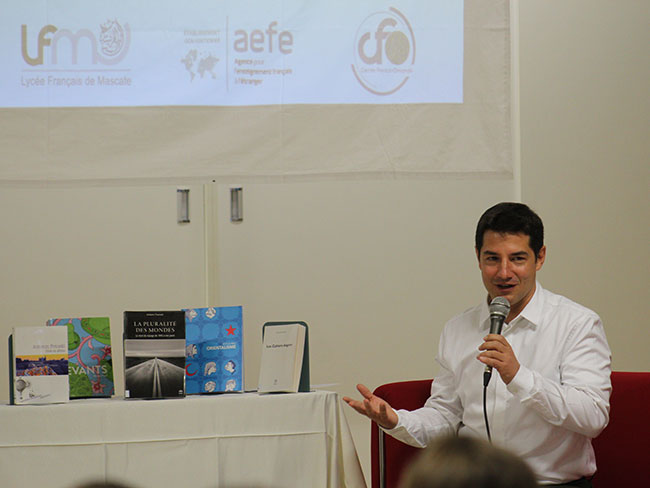 A trio of French Language authors met recently with an appreciative audience, at the Lycée Francais de Mascate, under the patronage of the French Ambassador to Oman, Renaud Salins. The University of Nizwa’s Dr Guillaume Thouroude, prominent travel writer Antonin Potoski, and novelist, Nicolas Presl were the guest presenters at an event that again demonstrated the extremely healthy relationship between France and the Sultanate. Nadege Soares, the LFM Chargee de Communication, commented that, “It was a marvellous event, enjoyed by all participants, from students to VIP’s, and of course Ambassador Salins has already demonstrated his enthusiasm for such events, and was absorbed in the discussions throughout.”

Dr Thouroude explained that he had been in Oman for just three years, but has been impressed by the aptitude of the Omani students for the French Language. Literally, he explained, while discussing, ‘Lettres du Brésil,’ published recently, that he is interested by the different perspectives of different nationalities. “The best travel experiences for me involve people and landscapes. Nice people without an interesting territory don’t stimulate me. On the other hand, striking landscapes without encountering anyone from that place makes this experience facile. I will always remember swimming in the Purple Clouds Lake in Nanjing with my Chinese friends, and interactions with the nomadic ‘gypsy’ community in Belfast, Northern Ireland. It is these human interactions that appeal to me.”

In response to a question from the audience, asking how much he plans his travels? Dr Thouroude said with a smile, “Actually, I am not in control and life chooses for me, so travel takes me where life takes me.” He went on, “My wife and I are so fortunate to wake up each day to the chirping of a thousand birds, in an old oasis. It must be so like the paradise of the Quran. This, the mosques and prayers of the faith are what exemplifies this country, and what I will remember when I eventually leave, but I am so fortunate to be a humble believer, who is also a ‘son of the road.”

Presl too is an Omani resident and a teacher, who, while originally inspired by the classicists, favours a more modern approach today, even using the iconic Picasso for inspiration. He explained, “I have always had taste for history, and I use to read historical texts in parallel with literature. I believe it is important to know a little of our history to better understand our current era, in a completely different way, I also really liked drawing the costumes and settings of the times that my characters were set in. I like this documentary work, yet my last three books are spent in a contemporary time, and the reference to history is less direct.”

Pressed to explain the relevance of books to a ‘techie’ society, he commented, “Our societies need imaginations, new ideas, images and poetry. I believe too that there will always be a place for creators, and that young artists must persevere in their desire to share, because we will have need of them to confront, and understand, the times ahead.”

Potoski has a long-standing relationship with the Sultanate, the former photography curator having been involved in this form of artistic expression for many years. Now, he is closely involved with French language educational programmes in the Sultanate, with his texts frequently used in language assessment. “This year, the students of 3 classes of the LFM studied our books, so our March assessment was the final event for those students who were already familiar with them, and I have to say their questions were quite brilliant.”

Asked why Oman appeals, he said, “Oman is interesting to me because it brings together many of the societies I explore and describe in my travel stories. Oman has very special historical ties with East Africa. It has also modern ties with the Indian Subcontinent, with the presence of thousands of expatriates. Also, I would say Oman is the most interesting of the gulf countries, because of the diversity of Omani society. When you listen to conversations in public, you can hear not only Arabic, but also Swahili and Baluchi. Those, and many other origins make Oman very special to a travel writer like me.”

He went on to offer an anecdote which he feels clearly describes the effect of Oman on travellers. “Last year, with friends in Oman, we organised a ten days tour of the country, which we called the ‘Thesiger Tour’ because we roughly followed the steps of explorer and writer Wilfred Thesiger. At night, in the dunes of Mugshin bordering the Rub-al- Khali, a book of Thesiger was passed from hand to hand around the fire, everyone reading a page at a time. That was an unforgettable experience, and almost as if we had invoked the spirit of the man.”

Acclaimed as a contemporary artist, how does Potoski see himself? “More than an artist, I am a writer. I write only non-fiction books, which means that before the time of writing, they need to be lived! Thus, a big part of my work is meeting the people who will become like my family members. I travel in quite complicated areas, like the border between Ethiopia and Eritrea, or between Myanmar and Bangladesh. This is possible only because, in both places, I have a more than ten years relationship with locals, with whom I talk about friendship, about magical moments, and lost places!”

Potoski continued enthusiastically, “I don’t have a house and I did not stop travelling since 1996, and I can say that now only friendship makes me feel home, wherever it happens. I received a grant from the French government and was invited to stay six months at Villa Kujoyama, a French-owned artists residence in Kyoto, Japan. As I always move, I take notes in a country, and I am already in another country by the time I type those notes and turn it into a book. So, in Japan, I was writing about Sahel villages in West Africa, and the Japan way of life, everything I learned there, entered my West African stories. When I was writing in Bangladesh, a lot of feelings gathered in Oman entered my stories. My books are built layer by layer and the story will always have multiple geographic and cultural extensions as a result.

This event continues then, the strong impression of investment which each of the two countries values in the other, and as Soares concluded, “As artistic, pedagogical and educational events, these evenings could not be any more effective or successful.”